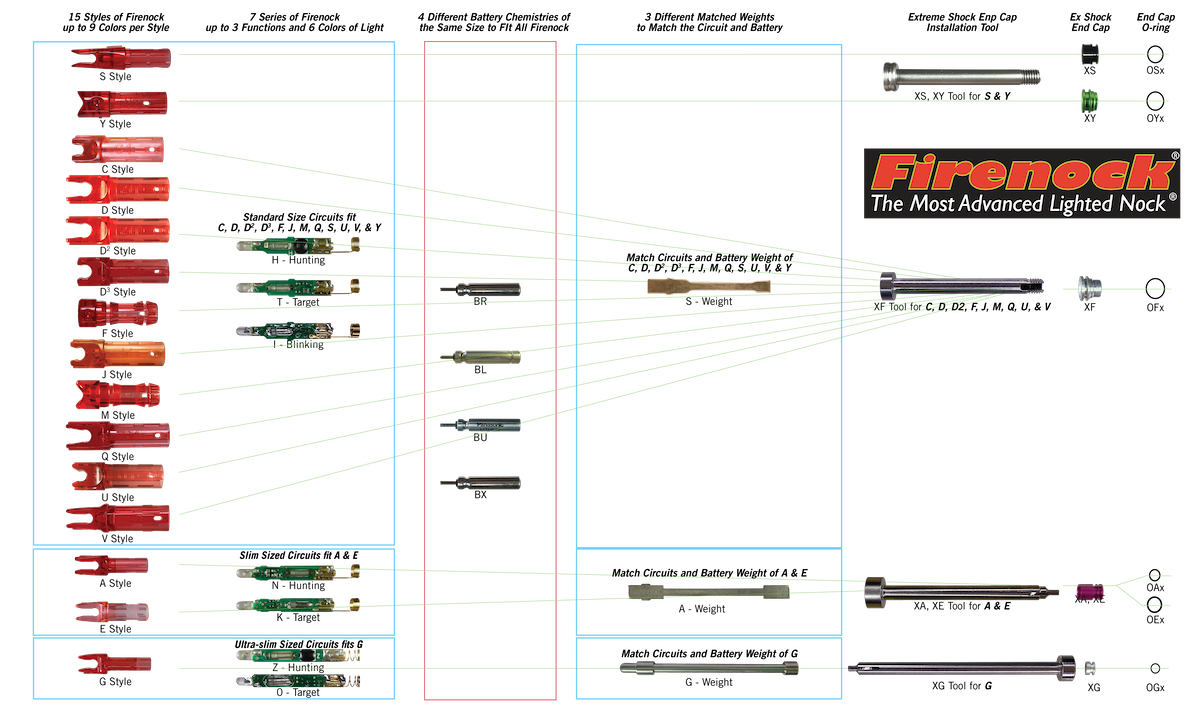 Firenock is the most advanced lighted nock system on the present market.

Firenock works both with Missile-Arming Technology, which means that it lights up once fired, and with a miniaturized directional G-switch, which means that it does not require any sort of actuator to turn on/off (US Patent # 7837580). Firenock is super durable, remaining lit after hitting hard objects (e.g. bone, stone or concrete), after game moves vigorously, or even if it is submerged into water for weeks equipped with a Hydro Bow-Fishing Adapter.

Firenock is also available in THREE light functions to match your needs. Hunting (H), the most common light function that can stay lit for up to 21 days, this capacity is perfect for white tail, bear, and any other big game. Target (T), perfect for practice, target shooting, and bow-fishing, this capacity automatically turns off after 17 seconds. Intermittent or blinking (I), used for ground blind shooting and perfect for turkey and other small game, this capacity can blink for up to 21 days. Finally, to handle different climates and environments, Firenock also offers three types of batteries.

The Firenock lighted nock system is the most versatile and most advanced of its kind. There are currently 15 styles of Firenock lighted nocks available to fit and replace most arrows on the market. In 2018, with the addition of the “U” style nock (Patent: USD717,389), we proudly announced that we have a lighted nock system for every known crossbow bolt serving size. and last year, we only perfected our lineup with the addition of the D3 nock.

Designed to suit every hunter or competitor’s needs, the FLNS has tens of thousands of possible combinations. For convenience, three and six system packs are available in each of the fifteen nock styles in up to three of our most popular colors (blue, green and red) and in up to four functions (“h” hunting, “t” target, “ht” hunting & target, and “i” blinking.) Every component is also available in separate packs to allow for complete customization.